The DisUnity of the United Methodist Church

The United Methodist Church recently became the largest oxymoron in the world. A division has been festering for decades. With 7.6 million members the second largest denomination in the United States is facing a mass exodus. Many churches and leaders within the denomination are joining the Global Methodist Church and others are simply becoming independent churches.
The conferences which have already allowed the disaffiliation of churches have suffered an approximate loss of 1/3 of their local churches. The UMC has seen decline in numbers over an extended period of time and now they are facing a mass exodus of local congregations. This exodus only accounts for those congregations which can afford to pay for the onerous process of disaffiliation. This does not account for those local congregations that have yet to disaffiliate or simply cannot afford to do so.
What were some factors which created the great divide? I want to share my observations regarding what led to the schism in the United Methodist Church (UMC). Maybe these observations are a foreshadowing or a warning for other denominations.
1. The "tent" got too big. The second largest protestant denomination in the United States decided years ago to tolerate theology beyond their doctrinal distinctives, and eventually even practices outside the borders of orthodox Christianity. It began with a devaluation of Scriptural authority. They debated areas where American cultural values attacked Christian morality (based upon biblical truth) as if they were up for debate. First, in regards to things that were certainly debatable as to their benefit for holy living, but eventually evolving into abortion and ultimately homosexual practice.
Higher criticism led to the dismissal of the validity, authenticity, and truthfulness of any of the biblical account; making it all up for grabs. If one could pick and choose what is real and what is not, then why not question the literal resurrection of Jesus or the virgin birth of the Messiah? These doubts about basic Christian beliefs aligned many in UMC universities and seminaries, as well as some bishops and pastors, more with atheists than Christianity.
As Jay Therrell writes: "The Big Tent Has Collapsed"
2. They opted for institutional preservation. As allegiance to the Holy One of Israel was diminished, it began to be replaced with allegiance to the denomination and its institutions. Disregarding any faithfulness to orthodox doctrine and practices of the UMC, leadership and others viewed the highest crime as one against the "unity of the church." The problem is that this "unity" was actually no more than biblical and theological compromise. Biblical unity is always unity in Christ. To teach that actions and attitudes contrary to biblical holiness are acceptable, is to break the unity of God's holy church. Further, to defend and demand loyalty to an institution which has left its first love, Jesus, is to defend and demand loyalty to a human endeavor. This is quite different than defense of and loyalty to the “body and bride of Christ.”
To clarify, we are not talking about secondary theological matters such as the mode of baptism or End Times perspectives, but foundational salvific issues. For example, 1 Corinthians 6:9-10 explicitly states that homosexual practice will prevent an individual from inheriting eternal life. Furthermore, 1 Timothy 1:8-11 indicates sexual immorality and homosexual practice, among other sins, are contrary to sound doctrine. Beyond the explicit scriptures that prohibit the practice, in all 66 books of the Bible, there is not even one positive depiction of same-sex behavior… not one.
The Gospel was meant to transform individuals and therefore society and cultures. The true Gospel was rejected for a more socially and culturally palatable imitation of the gospel. The all-inclusive love found in the prevenient grace of God which proclaims ‘all are welcome’ came to mean, all are affirmed and that no repentance, transformation, or life change was necessary. All that was necessary was a generic faith incapable, or at least unwilling, to confront sin in every form (socially acceptable or not). As the Gospel was jettisoned, many bishops, educators, and pastors became more closely aligned with Unitarian Universalists than with Christianity. I doubt Jesus would recognize much of what some claim to be the gospel today.
Tod Bolsing, in his book "Canoeing the Mountain", writes: "If every system is 'perfectly designed for the results we are getting,' it became clear to me that our denominational system exists for institutional self-preservation."
3. "Love" became a middle way that was supposed to bridge the gap. The idea was that both biblical Christians and those compromising Christian sexual ethic could both agree on the emphasis of love. It was a way to bring everyone together and maintain a spirit of unity. The promoters of this way maintained that perhaps people would choose love rather than disagreement.
The problem is that 'love' was left as an ambiguous term and therefore became conflated with affirmation. Cultural expressions and clichés such as "love wins" began to be employed as theological statements. Over time, love's definition transitioned from "willing the greatest good for the other according to God’s will" to "affirming every behavior of another." With this transition, the middle way usurped the narrow way.
A secular cultural understanding of love and affirmation, rather than a biblical understanding, became the value system which brought about the decay of leadership within the denomination. The truth was demoted and ultimately judged incompatible with this new cultural definition of love. Many did not support the teachings of the church or value the scriptural emphasis to define morality and piety. The energy and position of leadership were used to change the church's polity and doctrine; or to simply undermine it. Truth was redefined as personal sentimentality and feelings, resulting in an ever fluid culturally acceptable relative morality. 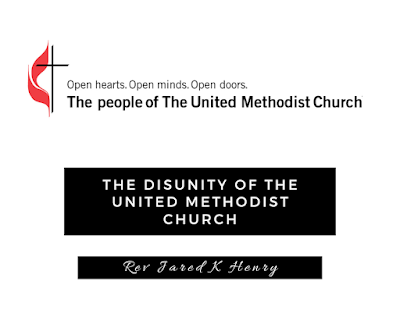 4. There was a major shift in soteriology. The basic Gospel found in Scripture was exchanged for an anthropological-based spirituality. Jesus ceased to be the exclusive means of salvation for humanity. Sin was ignored as the basic element alienating humanity from its Creator. Repentance was no longer necessary. Humanity became no more than a victim of sin, thus ceasing to be a perpetrator of sin. Humanity, if only a victim of sin, was no longer morally culpable for their sin. Universalism seeped into the thinking of many so that an "all inclusive" attitude toward salvation ruled the day. Personal accountability and responsibility were ignored in favor of a perspective exclusively focused upon defined people groups.
5. The educational institutions produced clergy who were ideologues instead of prophets and priests of God. Long before the denomination felt the impact of unfaithful ministers and leadership, they lost their universities and seminaries to cultural humanism disguised as spirituality. This led to a distinct shift away from biblical theology which provided the basis for the historic positions of the Church and was replaced by the newest theories and trends in theology.
Followers of Christ were replaced with followers of popular theologians. Higher criticism replaced holiness in the ivory tower of academia. Philosophy replaced theology. What began as a debate about the accuracy of the biblical text on the life of Jesus ended with referring to God as ‘mother’. What began as questions about the atonement, ended with a rejection of God’s righteous judgement and doubts about the resurrection of Jesus. Eventually some of the schools and seminaries broke ties with the UMC as the denomination itself was not compromising truth in ways or at a rate acceptable to those academics on the sidelines of authentic ministry.
6. Lack of discipline. The UMC Discipline is still clear on the issues the UMC faces regarding LGBTQIA+. The problem was that many American UMC ministers first openly ridiculed the biblical and orthodox stance the denomination had affirmed over and over at its General Conference. It was the African delegates to General Conference who remained mostly faithful to UMC biblical orthodoxy (see Rev Dr Jerry Kulah’s message during the UMC’s General Conference in Feb 2019).
Without recourse from leadership, these American cultural activists protested what they claimed was discrimination against the marginalized people of society; namely those who were practicing homosexuality. Eventually, in self-righteous defiance, American and European ministers began to participate in and then officiate at same-sex weddings. Their bishops followed suit. Then ministers began to publicly "come out" and insist on their ongoing inclusion within the leadership and ordained ministry of the denomination. Only in certain places were these issues of rebellion met with church discipline and accountability.
The rejection of biblical teaching and the UMC Discipline was largely ignored. Emboldening those advocating for sinful behavior, the ‘Western’ segment of the denomination continued to be infected by a spiritual cancer that simply did not go away. They lacked accountability, discipline, and genuine discipleship.
7. Leadership was often silent or even complicit in the change by refusing to resist, vocally oppose, or actively work against the changing landscape. The call from many leaders was to trust "the system." "Trust the process" was their insistence as the denomination continued to be infected by false teachers and leaders. The leadership would maintain: "The Discipline of the UMC isn't perfect, but it has guided us thus far.” The reality was and is, that everything was not "all right." Those who trusted the leadership of the UMC have been, and will continue to be, woefully disappointed if they hope to see spiritual renewal or action that leads to moral correction come from the council of Bishops. This disappointment is especially evident in UM churches in Africa.
Fear of cultural pressures and legal lawsuits from false teachers debilitated efforts to resolve the problem. The inconsistency of denominational response made it difficult for even faithful Methodist leaders to deal with issues within their level of authority. The response by most leadership was simply to "pass the buck" up "the chain of command" leaving others to deal with the problem. The problem was exacerbated by the insistence of differing levels of leadership that, according to their polity, they could not address the problem... or that they simply would not. Later leadership began even actively undermining those who were committed to being faithful to God's word.
Conclusion. These observations are worthy of a moment's pause to discern our own denominational (or even local church) trajectory. The Presbyterian Church (USA) is hemorrhaging members, money, and more because they amputated orthodoxy along the way. The insistent pressure of cultural ideology and influence is a constant that runs throughout church history. Every generation must rise up to reject the world's influence upon the way of holiness. We are in the world, but not of the world.
The Great Commission gave way to societal approved social justice philosophy. Taking care of the physical needs of individuals, which is certainly a biblical call, became prioritized by some as a means of cultural accommodation rather than Scriptural faithfulness. Then this ideology, under the guise of social justice, took precedence over the more pressing concerns of the Gospel and Great Commission: namely one's eternal salvation.

Watch for the upcoming article titled: "A Way Forward for the Church of the Nazarene."

Check out the following articles:

How to Lead Your Church into Apostasy

"Progressive" Christianity is the Real Problem